Bogner Amplification has recently added a new member to its Goldfinger-family of guitar amps. In addition to the two-channel Goldfinger 45, there’s now also a single-channel amplifier available, called the Goldfinger 54 Phi.

The basic idea behind the Bogner Goldfinger 54 Phi combo (current price in Finland: 3.091 €) was to develop the most versatile single-channel valve amp possible.

The 54 Phi’s starting point was the Goldfinger 45’s clean Alpha-channel. The new model is concentrating mainly on clean tones, and it is meant as the ideal combo for guitarists who achieve most of their sounds with the help of effect pedals. 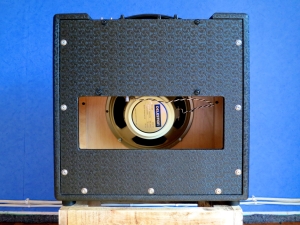 In its combo version – the 54 Phi is also available as an amp head – weighs in at about 26 kilos.

The cabinet is made from pine ply and it sports an open back construction. 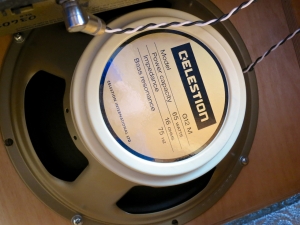 A four-button footswitch unit is sold with the GF 54 Phi, and it gives us some hints regarding the combo’s versatility and features.

Bogner’s Goldfinger Phi offers a lot of scope for adjustment, so that every guitarist can dial in the sound he or she wants. Due to its versatility the 54 Phi needs you to get familiar with all its features, before plugging your guitar in and wailing away.

Actually, you should start your sonic journey with this Bogner’s back panel! The GF 54 Phi comes with a slightly unusual split power amp that employs two pairs of power amp valves – a pair of 6V6s and a pair of 6L6s. Each pair can be switched on or off individually, while the front panel’s Hi/Low-switch makes it possible to use only a single power amp tube from each pair, in effect halving the combo’s output power. By using the Hi/Low-switch and the power amp switches you can choose from six power modes. The lowest alternative lets the Goldfinger Phi run at approximately nine watts (6V6, Low), while the highest power mode (6L6+6V6, Hi) will give you the combo’s full 66 watts of output.

As were talking about a valve amp here, choosing between pairs (or single) power amp tubes doesn’t only have a bearing on the 54’s power rating, but it also affects the amp’s behaviour, especially when it comes to clean headroom and power amp compression (sag). You need to find the “right” tube and Hi/Low-switch mix for your own, personal tone.

The Gain knob is used to set the preamp gain, while Loudness is what Bogner calls their master volume controls. There are two signal boosts implemented in the Goldfinger Phi’s preamp, but their are placed at different points in the signal chain, which makes them work and sound differently. The adjustable Boost booster is placed in front of the Gain control, even making it possible to achieve some distortion, if necessary. Solo, in turn, is a fixed booster that sits right at the end of the preamp.

Bogner’s GF 54 Phi offers you two different EQ-configurations. You can choose from Bogner’s own, modern tone stack or switch to a vintage Baxandall EQ. Originally, the Baxandall circuit was designed for Hi-Fi equipment, but it found its way into some guitar amps from the 1950s and 60s. Due to the way a Bax EQ works, there’s a perceivable drop in volume when you switch over without readjusting the EQ controls.

The EQ-section is complemented by a separate Presence control, as well as two Expand-switches (one adding bottom end, the other treble).

It may come as a shock to some valve purists, but Reinhold Bogner has deliberately chosen a digital reverb unit for his 54 Phi. In his view this digital unit offers more depth of sound and lushness than the type of spring tray he’d be able to fit into the 54 Phi combo. The reverb type features a little bit of chorus-style modulation to liven things up even further.

I’ve moaned about this before, and I’ll say it again: I’m not the biggest fan of Bogner’s downward-facing back panels. Unless you know the exact position of all connectors and switches by heart, you are forced to lie on your back to make sense of it all.

Be that as it may, the Bogner Goldfinger 54 Phi’s back panel gives you a wide array of different options for getting the most from your combo. 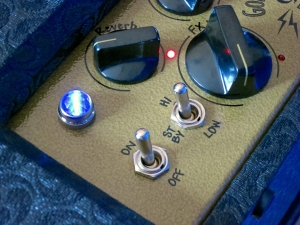 I was only given a weekend to test Bogner’s new baby, which is why I didn’t have enough time to record more audio demos. I still managed to come up with two, stylistically rather different demo songs.

The first track was recorded with the 54 Phi combo running in in 9 watts power mode, which made it possible to achieve overdriven sounds without the aid of pedals, simply by running hot humbucking pickups into the Goldfinger. The lead guitar is a Gibson Les Paul Junior with the tone knob turned down halfway, while all backwards guitar tracks were played on a Gibson Melody Maker SG. I recorded the combo (in both demo songs) with a Shure SM57:

The second demo track was recorded with the Bogner running at full tilt (66 W), and with a Boss SD-1 overdrive and a Joyo JF-37 chorus pedal in front of the combo. All guitar parts are played on a Flaxwood MTQ Hybrid guitar with a neck humbucker and a Telecaster-type single coil in the bridge position:

Bogner’s Goldfinger 54 Phi is a prime example of the versatility and quality of sound a well-designed, single-channel valve amp can offer.

This is a combo for the sound aesthete, who wants to build a strong foundation for his or her sound, regardless of whether this tone comes from just the fingers or a range of effect pedals.

Posted on August 29, 2016, in Uncategorized. Bookmark the permalink. Leave a comment.