Marshall’s DSL5C combo is the newest – and smallest – member of the DSL-series.

The DSL-range has its roots in the year 1997, when Marshall introduced their – now legendary – JCM2000 Dual Super Lead -head. The JCM2000 was the first Marshall amp that combined a vintage-voiced Plexi-channel and a modern Ultra Gain -channel in one chassis.

The production run of the original DSL-series was discontinued in 2007, with the JVM-range superseding it. The new DSL-series offers the company’s most-affordable all-valve amps to date, which are produced at Marshall’s own facility in Vietnam. 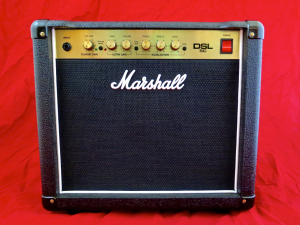 As you can easily guess by its name, the Marshall DSL5C (current street price in Finland around 520 €) is a five-Watt, two-channel combo.

In terms of its looks and the quality of its finish, this is a genuine Marshall. Quality control at the Vietnamese factory seems to as stringent as in Britain, and the combo looks great and feels well-made and sturdy. 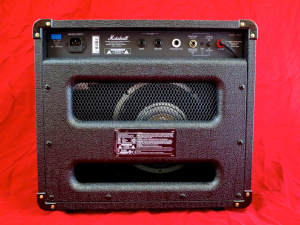 Posted on June 6, 2014, in Uncategorized. Bookmark the permalink. Leave a comment.